“Othersville,” the suburban enclave of the DHARMA Initiative and subsequently the Others (first seen in “A Tale of Two Cities,” Ep. 3×01), is the YMCA’s Camp H.R. Erdman (69-385 Farrington Hwy.) on the North Shore. The camp became a major set for Season 5, and appeared in several episodes depicting different time periods. The YWCA welcomes visitors and has signage offering parking for “LOST” fans, but asks that photos not be taken of children or other guests. 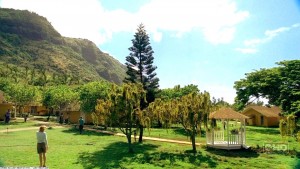